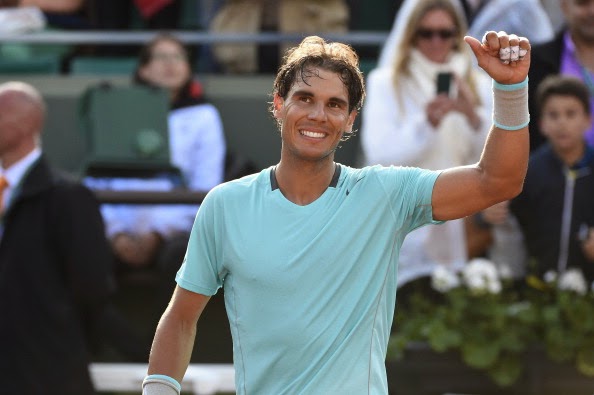 Rafael Nadal insists that he's not particularly fussed about which court he has to play on for his matches at Roland Garros this year.
There was a fair amount of press attention given to today's French Open schedule, and one of the reasons for this was that Rafael Nadal, the defending champion, had been scheduled to compete on Court Suzanne Lenglen rather than Court Philippe Chatrier. Many had simply assumed that the World No. 1 and eight-time Roland Garros champion would have been put on the venue's main stage.

As it happens, Nadal didn't appear to be the least bit concerned about the decision. He looked more than comfortable on the smaller court and wasted little time recording a comprehensive 6-0, 6-3, 6-0 victory over America's Robby Ginepri. After the match, Nadal clarified that he's happy to play on any of the courts here in Paris.

"[It] doesn't really matter a lot," he said. "Always playing Roland Garros is a pleasure for me, is really an honour, and is a special feeling. So all the memories at this place give me are unforgettable."

"And doesn't matter if it's Chatrier or Lenglen or another court, being around here in Roland Garros [is] always gonna be great. And I started in Lenglen this year, it's a great court. I am not sure, but probably next one I'm gonna play in Chatrier. That's it."

The only issue that Nadal struggled with today was the weather. The Spaniard was unsure whether or not he'd be competing, and admitted that it's not great to be sat in the locker room wondering if you'll be playing or not, especially at such a prestigious tournament. Regardless of this the Mallorcan believes that the motivation to compete keeps him focused.

"I really thought I would not play today during the day, so it makes the mentality doesn't stay at 100% all the time," he remarked. "And then the tension is there, and the motivation to play here always is very high. So you are ready."